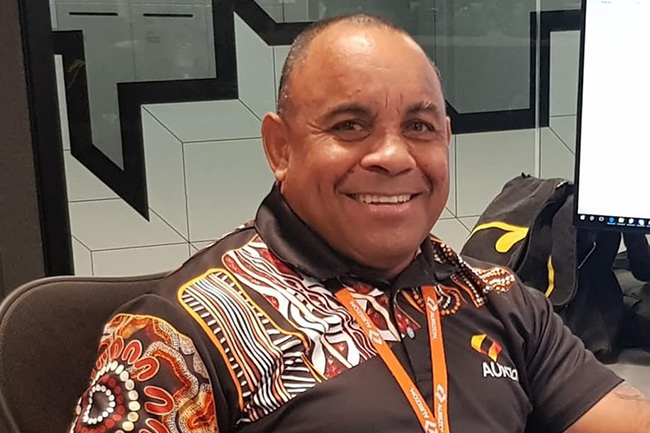 Conversations in the workplace make a real and sustainable difference to our journey towards reconciliation and help shape our Company and communities for the better.

As we pause to celebrate NAIDOC Week this week, long-term employee, Laurie Anno shares his story about his career at Aurizon, his contribution to our Indigenous engagement activities and what NAIDOC Week means to him.

Laurie is proud of his culture. His ancestry hails from the proud Kalkadoon warrior tribe in North Queensland and from Thursday Island in the Torres Strait. He is passionate about showing respect to all past, present and emerging Elders within the communities where he has lived.

Prior to beginning his 30-year career at Aurizon, Laurie proudly served as an Indigenous soldier in the Infantry Division of the Australian Army. He then started at Aurizon (Queensland Rail) as a Flying Gang Labourer in Hughenden, and over time has worked in various roles across our Queensland operations.

Laurie is now based in Brisbane as a Shift Roster Officer and helps coordinate our train crew rosters. He is one of the first points of contact for our coal train drivers in Central Queensland and the Hunter Valley when roster changes are required on the day of operations. Laurie says his goal is to make sure our trains are crewed to run on time so we can meet our customers’ requirements.

Laurie loves working as part of the Deployment Team and enjoys learning about his teammates’ backgrounds, families and future plans. He says everyone comes from a variety of different backgrounds and they enjoy sharing their stories and cultures with each other.

“I am proud to say, that within my team, we all treat each other as equals and show acceptance no matter their background or belief.

“NAIDOC Week gives me a chance to invite others to experience my heritage and culture. This year I am privileged to run some Indigenous Art Classes in our Brisbane office and will also be showcasing some of my artwork.”

Following a major injury to his right arm after playing Rugby League in 2014, Laurie turned to Indigenous art as part of his rehabilitation. He has fallen in love with sharing stories from his culture using a paintbrush.

Laurie’s passion and talent are evident in his artwork, which features as the cover image on Aurizon’s two Reconciliation Action Plans, as well as throughout the publications. He says he was honoured to contribute to such an important piece of Aurizon’s history.

His artwork also features on new corporate work shirts: something he is also proud of, but quite humble about. Like Laurie, the shirts are very popular with Aurizon employees and they are wearing them with pride.

Not surprisingly, in his spare time Laurie enjoys painting and has a huge art space at his home where he can often be found in the early morning or late at night working on one of his wonderful stories.

The importance of family to Laurie is apparent in everything he does. He says his partner and three children have supported and encouraged him throughout his career and have also been part of the Aurizon community.

“One of my proudest moments was taking part in a video series that not only profiled me, but also showcased my family and all their achievements within the school community, working with the Indigenous students and programs.

“As a family, and with Aurizon’s support, we ran several Art Days and Kup Murri (cooking in an underground oven) with the students and staff at a Rockhampton school, where my partner also ran the Indigenous Homework Club.

“Without some of the fantastic people within the Aurizon community, much of this would not have been possible. I want to thank all that had faith in me and backed my talent.”

When asked what the one thing Laurie would like people to take away from NAIDOC Week, he said he would like to see everyone within Aurizon and the broader community have a better understanding and acceptance of what NAIDOC Week is all about.

“I am passionate about my background and proud to be of both Aboriginal and Thursday Island culture. I would like to see some of the traditions of the Indigenous cultures to be passed along and shared, not just through NAIDOC Week, but throughout the year.”