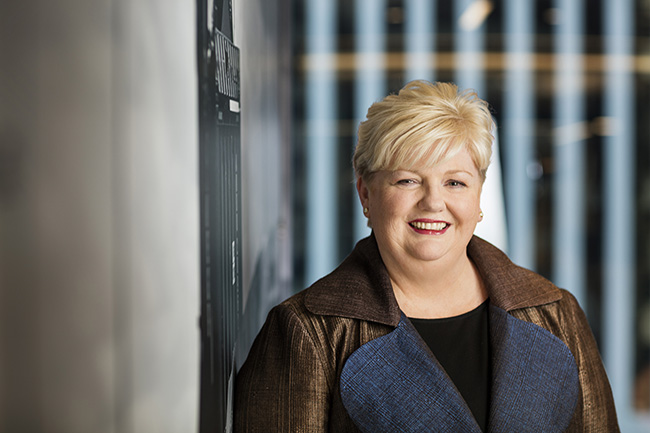 Ms Bryen is a finalist in the Corporate and Private Award category in recognition for her leadership efforts in the cultural transformation of Australia’s largest rail-based transport business.

“We’re now headed into our fifth year of work to improve representation of women in our organisation and Kathrina has been at the forefront of our journey, pushing and challenging long-standing assumptions that Aurizon would always be a male dominated employer,” he said.

“Being a finalist in the prestigious Telstra Queensland Business Women’s Awards is recognition of Kathrina’s 25 year career understanding and enabling people to create optimal business practices.

“Her impact has been felt and recognised not just in change at Aurizon, but in leading and role-modelling across our industry, throughout Australia, and overseas. Kathrina has been deservedly chosen from thousands of amazing Queensland women and we all wish her the very best on award night.”

Ms Bryen said she was honoured to be named as a finalist in the awards and was proud to be part of an organisation that valued workplace diversity so highly.

“I am truly humbled and honoured to have been anonymously nominated for this award. Ultimately I think the recognition is testament to Aurizon and the visionary support the Company has shown in tackling the gender imbalance in our workforce,” she said.

“I hope that my being named among the 5 Queensland finalists in the private company sector will encourage other female leaders to stand up and speak out about the people issues that make a real difference to the success of their organisation.”

Ms Bryen said she was passionate about inclusive leadership and advancing gender equality globally, and had been actively involved in supporting UN Women through fundraising to support the critical on-the-ground work for women’s economic empowerment in Fiji.

“When your passion drives you to deliver and you're genuinely committed and believe in the outcomes, it makes the challenge worthwhile and fulfilling,” she said.

Winners of the 2016 Telstra Queensland Business Women’s Awards will be announced on Friday 14 October in Brisbane. The Queensland winners proceed to the national finals in Melbourne on Tuesday 15 November.

Aurizon currently has a workforce comprising more than 80% men. In trade areas it can be as high as 90%. The company has set aspirational target of achieving 30% female representation by 2019.